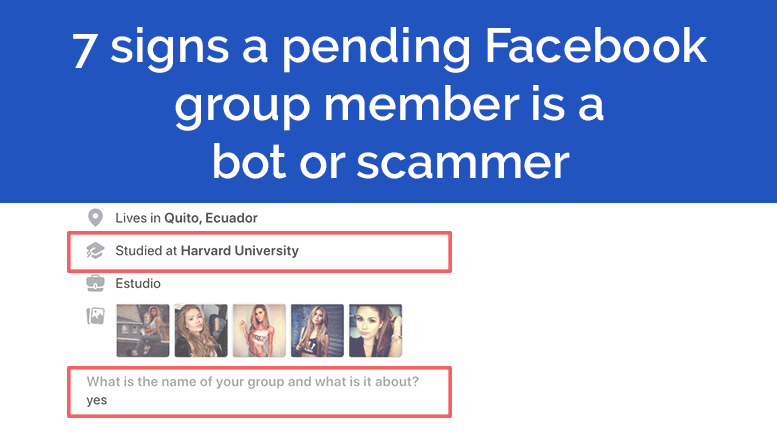 The scammers are getting good, folks! Some of these new fake profiles are several years old and even include a public friends list.

It used to be you could detect one from an old profile with a stock image. But recently, I’ve had a harder time detecting scammers and bots who are trying to enter my group. And there have been A LOT. How to report a fake profile to Facebook.

Here are some top tips that a pending group member may be a scammer:

They might have what look like two first names, odd spellings, or something else that seems really atypical.

David John Son sets off some alarms for three reasons:

(Disclaimer: I’m speaking from an American perspective here since my group is a local community group.)

They may respond “yes” to a question that is not a “yes/no” question. They may also answer questions oddly. For example, they will begin sentences like “I DO live in x town” which seems a little more intense than necessary. 3. If you ask for an email address (which I recommend), it looks fake.

If your name is “Steve Mathew,” your email is probably not sdaasdhajmdo@gmail.com. 4. They belong to every group under the sun.

Our man “Bence Vadja” belongs to groups that are all over the place, with no seemingly common thread: Bence’s pal, Brandon appears to be multi-lingual with his range of 100 groups: 5. Their profile is newly created.

This is an oldie but goodie. If a profile is new- for example in the past couple of weeks – especially if 1) the name is odd and 2) the name doesn’t match the email address. 6. Their spelling is incorrect.

So, generically named John Smith who joined Facebook less than six months ago spells “yes” “yess” and “no” “noo” and lives in Bostan. Okay. 7. If they have friends, they all look fake, too.

Remember Bence Vadja? Well, he has a lot of friends. And they all look like… European models? If you think a profile is fake, please report it to Facebook. The world is a much better place without bots and spammers wreaking havoc on the social media world. How to report a fake profile to Facebook.

This site uses Akismet to reduce spam. Learn how your comment data is processed.

Get the latest social media group strategies & updates from Grouptize!

Thank you! Look for updates every Monday!

You have Successfully Subscribed!